Slicing through trees and anything in its path

The Devilish Dervish is a large Sharp Class dragon that first appeared in School of Dragons.

In School of Dragons, Devilish Dervish eggs are oval and are grey in color. They have obvious scale patterns and bumps on them, that almost looks like pits and bits of rocks and pebbles. The egg fades to a lighter colour towards the top. It has some resemblances with the less oval Night Fury egg.

The Devilish Dervish has a long neck, stubby arms and mostly black in color with yellow tips on its wings. It has a pair of golden horns on its head, as well as spikes on its chin, back, and tail. It is very similar in shape and size to the Raincutter, the Prickleboggle, and the Hobblegrunt.

The Devilish Dervish boasts a long scythe-like tail that can slice through plenty of things like wood. Along with its reckless behavior, this dragon chops down everything in its path.

The Devilish Dervish can breathe fire that is similar in color to that of a Monstrous Nightmare.

This dragon is said to be stubborn and unruly, which makes it incredibly hard to train or reason with. This dragon is also very reckless and wild in nature. It is said that the Devilish Dervish is truly one of the wildest of dragons.

Devilish Dervishes are reckless and unruly, meaning they are stubborn and don't have much common sense. They also wouldn't be assumed to be very stealthy as wherever they go they leave a trail of chopped down trees.

Training Devilish Dervishes is said to be very hard due to their stubborn and unruly behavior, only for the most elite of trainers.

Originally from the books, the Devilish Dervish was the second book dragon to be adapted into the franchise via this game. 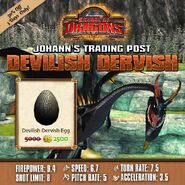 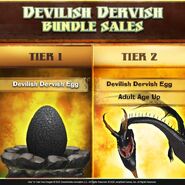 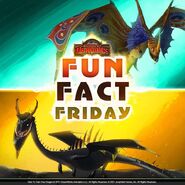 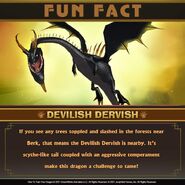