Defenders of the Wing

The Defenders of the Wing are a tribe of dragon worshipers on the island of Caldera Cay.[1] They were initially introduced as antagonists, wanting to kill the riders because of the idea that they were working with Dragon Hunters. However, after realizing the riders' allegiance, they soon became some of Berk's strongest allies. They first appeared in the episode "Defenders of the Wing, Part 1".

Unlike all previously encountered tribes, the Defenders don't seem to be based on Vikings and are rather designed as an Asian civilization, (or ninjas) with a lot of Chinese and Japanese elements in their clothing, weaponry, and architecture. The Defenders seem to be a monarchy, ruled by Queen Mala who is very protective over her kingdom and all dragons, which the Defenders see as holy beings. Especially the Eruptodon, a Boulder-Class dragon that lives inside a volcano on Caldera Cay and prevents it from erupting for which it is worshiped as the Great Protector. The Defenders frequently offer it tribute, like food and flowers.

They seem to have a vast knowledge of dragons but any contact, like flying on their backs, is strictly forbidden. Thus the Defenders do not bond with dragons and don't know about dragon training.

The Defenders lived in peace with the dragons on their island; they also established a relationship with the Eruptodon, whom they called "The Great Protector". At some point, they also encountered the tribe of Dragon Hunters that came to be led by Viggo Grimborn, and a lasting antagonism developed between the two factions. Viggo later played this fact to his advantage in his conflict with the Dragon Riders, whom he tricked into traveling to the Defenders' island with a map he had made out to make it look as though they were his allies. Using their arrival as a distraction, Viggo and his men then sneaked onto the island and captured the Eruptodon, taking it to Dragon's Edge in order to activate the volcano there, effectively enabling Viggo to eliminate both his greatest enemies. However, the Defenders and Riders were able to work together to save both islands and the Eruptodon and soon joined forces against Viggo.

Mala, queen of the Defenders, came to believe that Rider Snotlout Jorgenson might prove to be a worthy king, but Defender law required that he pass a series of tests in order to earn the position. Though Snotlout was surprisingly capable, he failed the final test and was thus disqualified.

The Defenders' clothing comes in a variety of garments, depending on the gender. While the males wear sleeveless black tunics with built-in shoulder guards that end in 2 layers front and back, the females wear long-sleeve tunics that also end in layers. Both genders wear identical hooded masks that cover most of their faces so only their eyes can be seen.  They also wear black leather leggings and tall black leather boots. When needing to get close to the volcano, they coat their clothing with Eruptodon saliva, as it aids as a fire retardant.

As mentioned by Throk in "The Wings of War, Part 1", Defenders of the Wings always repay their debts, even more greatly when their life is saved.

As said by Mala in the expansion "Secret of the Leviathan" of the game School of Dragons, the Defenders of the Wing people have a unique strategy if they ever get lost on their island: whistling. That way, they make a sound that is specifically assigned to this purpose, in order to be found by the tribe. The sound is very loud so that it can be heard over the continuous noises of the island's volcano.

One of the most important celebrations of the Defender of the Wing tribe is "Changing of the Guard". As described by Throk, once the Eruptodon grows too old to be able to protect the island, the position of "The Great Protector" passes down to the next generation. The old Eruptodon then leaves for Vanaheim, the final resting place for all the dragons.

Caldera Cay is a monarchy. Mala is currently the Queen of Caldera Cay and the Defenders. During her reign, Mala chose Snotlout Jorgenson as her king. However, to prove his worth, Snotlout had to undergo three trials to prove himself worthy of being Mala's king.

To become king, Snotlout had to undergo three trials:

However, Hiccup had Toothless sabotage the final trial and Snotlout failed to catch the arrow before Mala was able to grab it. Dagur later underwent the same trials and passed, proving his worth to Mala, therefore becoming king. 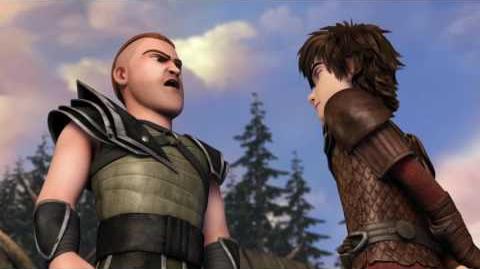 Retrieved from "https://howtotrainyourdragon.fandom.com/wiki/Defenders_of_the_Wing?oldid=587129"
Community content is available under CC-BY-SA unless otherwise noted.