How to Train Your Dragon Wiki
Register
Don't have an account?
Sign In
Advertisement
in: Dragons, Dragon Hybrids and Subspecies, Tracker Class,
and 4 more

The Deathburple is a hybrid between a Deadly Nadder and a Hotburple that first appeared in the game Dragons: Titan Uprising.

The Deathburple is a four-legged dragon that inherits the heavy built of its Hotburple parent. It has broad wings with the spotted pattern of a Deadly Nadder. Its head is quite wide, having the nasal horn of a Nadder and the underbite of a Hotburple. While the Deathburple has inherited the spiky crown of a Nadder, its spike are shorter and immobile. On its chin amd on the sides of its body, the Deathburple has protruding hard bumps, inherited from the Hotburple. Its tail is identical to that of a Nadder, with spikes that can detach growing all the time.

Titan Wing Deathburples are slightly bigger than their adult counterparts. Their nasal horns and crown of spikes increase significantly in size, though not much else is changed.

The Deathburple can produce both the magnesium fire of a Nadder and the balls of fire of a Hotburple.

Just like its Deadly Nadder parent, the Deathburple is capable of launching the spines on its tail with high precision at targets. Some Deathburples, like Briarvane, coat their spines in poison from toads so that they can kill their victims more efficiently.

Inherited from the Deadly Nadder side, Deathburples are very intelligent dragons. However, they often misuse their intelligence by pulling pranks of other dragons. They are also capable of empathy, comforting anyone they upset with their pranks.

Deathburples are extremely lazy dragons, trait inherited from the Horburple side of the faimily. They sleep most of the time, leaving them vulnerable to attacks.

Deathburples have inherited the behavior from both its parent species. They are vain and fierce, as much as they are lazy and mischievous. Deathburples would rather trick other dragons into hunting food for them, instead of doing it themselves.

Deathburples are also very caring, comforting anyone they might have upset with their pranks. They live in families, with both parents taking equal care of their young. Deathburples will also look after eggs that are not their own.

Due to their lazy nature, Deathburples can be easily trained with food. Once a bond is created, the dragons become very protective of their rider and will protect him at any costs.

The Deathburple was first introduced in this game, along with many other dragon hybrids. The only way a player can obtain a Deathburple is by breeding a Deadly Nadder and a Hotburple in the Breedery. 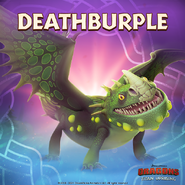