Tuffnut's Death Ride is a Premium Whispering Death that appeared in the game, Dragons: Rise of Berk.

At some point - after the events of How to Train Your Dragon 2 in the Dragons: Rise of Berk game timeline - Tuffnut tames and trains a Whispering Death, presumably on Berk. This dragon is called Tuffnut's Death Ride. How he did so or how difficult it was remains a mystery.

Death Ride may be a reference to the television episode "What Flies Beneath", in which Tuffnut states many times that he wants a Whispering Death.

Death Ride has a reddish-brown body in color. However, its mouth and wings glow bright blue and blue colored flames of similar color emerge from its eye sockets. Its wing membranes are also a bright, almost glowing aqua color. 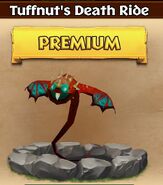