How to Train Your Dragon Wiki
Register
Don't have an account?
Sign In
Advertisement
in: Dragons, Dragon Species from the Books, A Hero's Guide to Deadly Dragons,
and 6 more

The Deadly Nadder is a species of dragons found in the book series, and, despite its namesake's popularity in the DreamWorks Dragons Franchise, very little is said about it.

Deadly Nadders are long and serpentine, and at least come in the colors of green or purple. Their bodies are so long and rope like, that they can get tangled when sleeping together for winter hibernation. In "How to Train Your Dragon", they have yellow cat-like eyes and ears (presumably this is referring to ear pinna (flaps)).

In A Hero's Guide to Deadly Dragons, Hiccup reveals that Deadly Nadders can be subdued by rubbing their bellies with the end of a twig of nettle.

During his initiation test in Fishlegs tries to capture a Deadly Nadder, but wakes up the entire cave of dragons, forcing the young Vikings to flee for their lives from the Dragon Nursery.

A small, juvenile Deadly Nadder is wandering in the Caliban Caves crying for its mother. However, this dragon is eaten shortly after by a Monstrous Strangulator.

Deadly Nadders are mentioned in this book when Hiccup is rapidly running through information in his head about how to deal with Poisonous Piffleworms in the Meathead Public Library. 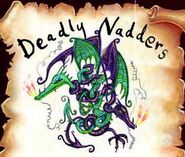