Dazzlesing is a Slithersong that appears in the game, Dragons: Rise of Berk.

Dazzlesing is a startling, vibrant set of tropical colours: primarily a deep ocean blue, which fades to bright pink then yellow along its wings and snout. Dazzlesing has a yellow nasal horn, frills, tail fins and dorsal fins, with pale pink claws and a pale pink/blue striped set of horns. Its eyes are sky blue and, like most Slithersong eyes, outlined by a rim of dark red. Dazzlesing has several small, sky blue speckled patches, giving it a galaxy-like appearance.

Like all Slithersongs, Dazzlesing has a special song to lure prey - other dragons - closer to it. However, unlike most Slithersongs who have more subdued coloration, Dazzlewing is quite brightly hued, and uses this to confuse enemies or predators, but making it difficult to get a clear line of sight on it. 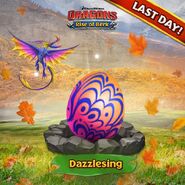 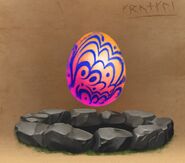 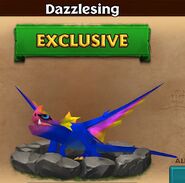 Retrieved from "https://howtotrainyourdragon.fandom.com/wiki/Dazzlesing?oldid=530831"
Community content is available under CC-BY-SA unless otherwise noted.