Dawnstar is a Large Shadow Wing who appears in the game Dragons: Rise of Berk.

Dawnstar is a dark, sunset-orange in primary scale colouration, with a secondary colour based at reddish brown. Her wing membranes are a deep chocolate shade of brown, and are flecked liberally with brighter red, diamond-like markings. Her claws are this same shade of red, as are her tail flukes and head spines. She has a similar build to that of any other Large Shadow Wing, and golden yellow eyes. Despite Dawnstar's sunny colouration, she apparently detests getting up early in the mornings, and often won't get up until noon. According to Rise of Berk, she is also very grumpy when she does wake up. 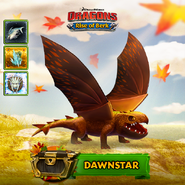 Retrieved from "https://howtotrainyourdragon.fandom.com/wiki/Dawnstar?oldid=530830"
Community content is available under CC-BY-SA unless otherwise noted.