Dark Deep is an island that appears in many locations in the Franchise, including the TV episode "Quake, Rattle and Roll", as well as several games.

In all iterations of Dark Deep, it is a dark, craggy island with little to no vegetation. It appears similar to the geology of Outcast Island. There are many caves with an extensive network of underground tunnels. In the game, School of Dragons, there are also some pools of lava.

In the app Flight of the Night Fury, there is grass, along with a metallic mineral called Thor's Ore that is the best material for Viking shields (this game came out before the advent of Gronckle Iron).

According to Rise of Berk, three locations are on this island, the Valley of Stone, the Sandy Beaches and the Rocky Plains.

Contrary to the above descriptions, Dark Deep is seen briefly in "Gruff Around the Edges". A cave is shown, but also trees of various sizes.

In the episode, "Quake, Rattle and Roll", Dark Deep is also the home of the Catastrophic Quaken –a fearsome Boulder Class dragon that is muscling out the Gronckles for their food source. But the Quakens might have a hidden secret, and the dragon riders must figure it out before the Gronckles are displaced forever. Dark Deep is both the ancestral home of the Gronckles in the Barbaric Archipelago and is one of the only known habitats of the Catastrophic Quaken. The Dragon Riders first discovered Dark Deep with the Dragon Eye, when Fishlegs was experimenting with Meatlug's lava.

In the episode "Between a Rock and a Hard Place", the Quakens that Hiccup and Fishlegs rescue from a marble quarry are sent to Dark Deep to enjoy their retirement.

In the episode, "Gruff Around the Edges", cousin Gruffnut Thorston comes to Dragon's Edge to visit the Twins. His ulterior motive, however, is to steal a dragon to repay a debt owed to some dangerous people. Ultimately he fails, and the Twins dump him on Dark Deep along, as punishment. Dark Deep is not mentioned by name in this episode, but is later revealed in Season 6.

In the episode "Living on the Edge", the twins and Snotlout are sent to Dark Deep to recruit some wild Gronckles to help make Gronckle Iron back at the Edge. The twins get Snotlout to distract the Quakens while the twins bribe the Gronckles away by feeding them rocks. They then leave Snotlout alone on the island to fend for himself against the Quakens, whom he eventually also leads back to the Edge.

Dark Deep is not seen in Season 6, but is mentioned in the episode "A Gruff Separation as the place the Twins banished Gruffnut to back in Season 4.

How to Train Your Dragon: Flight of the Night Fury is a defunct iOS app in which Dark Deep (as well as Shivering Shores) appeared. Game play consisted of Hiccup and Toothless flying to collect items, complete tasks, and discover different locations, such as finding Thor's Ore located on this island.

Dark Deep is a journey location for Fishlegs and Meatlug. While there, Fishlegs learns about the lifestyle different dragons (such as the Whispering Death and Thunderpede), helps Junior Tuffnut jr. or defends himself from a wild Shockjaw.

The island of Dark Deep appeared in the game, along with several other islands, at the release of the Expansion "Battle for the Edge" in December 2015. There are two locations for fishing.

In game play, there are several quests involving Dark Deep, including helping to save a Prickleboggle from the Dragon Hunters cage. There is also a Stable Quest called "Bedrock and Boulders" in which the player must send non-active Boulder Class dragons to clear up an avalanche.

Dark Deep also features in the School of Dragons expansion "Wrath of Stormheart". Nikora's soldiers attack the island as a diversion while she takes over Auction Island.

Map from the app "Flight of the Night Fury"

In "Quake, Rattle and Roll"

In "Gruff Around the Edges" 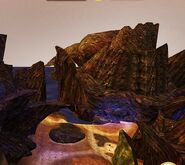 Retrieved from "https://howtotrainyourdragon.fandom.com/wiki/Dark_Deep?oldid=436035"
Community content is available under CC-BY-SA unless otherwise noted.