How to Train Your Dragon Wiki
Register
Don't have an account?
Sign In
Advertisement
in: Objects, Franchise Objects, Dagur the Deranged,
and 2 more

Dagur the Deranged wears this specific helmet during the TV series, Dragons: Riders of Berk and Dragons: Defenders of Berk. At this point, he is Chief of the Berserker Tribe. After his downfall, he is not seen wearing a helmet at all.

Dagur's helmet, and of course Dagur, make their debut appearance in the episode, "Twinsanity".

Dagur's helmet usually doesn't move much, but in the episode "Smoke Gets in Your Eyes", a Smothering Smokebreath dragon swipes it completely off his head, along with anything else metal that he's wearing. It's the first time we see him without his helmet.

Dagur hasn't been seen wearing his helmet so far in the series, but in the episode "Something Rotten on Berserker Island", Gustav wears Dagur's helmet while training in the "Berserker Apprentice Program", which Dagur later confessed was a sham. He was last seen wearing it during the fight on Berserker Island in "King of Dragons, Part 1".

While Dagur does not wear his helmet in the game, School of Dragons, his helmet does make an appearance as a wearable accessory for players to customize their avatars with. It comes in a standard form like the version seen in the TV series, and a Gronckle iron variety.

Concept art of Dagur (and his helmet)

In Dragons: Riders of Berk

In Dragons: Defenders of Berk

Gustav wearing the helmet in "Something Rotten on Berserker Island" 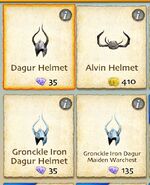