How to Train Your Dragon Wiki
Register
Don't have an account?
Sign In
Advertisement
in: People, Cast and Crew, Real Life, Females

Author of the Book Series

Cressida Cowell is the author of the How to Train Your Dragon book series.

Cressida grew up in a tall terraced house in central London. On weekends she visited her grandmother in Sussex (a suburban county just outside London), where there was an Iron Age hill fort. The fort's huge size inspired many local stories about giants, which always fascinated her. While there, she also enjoyed exploring the old yew forest nearby, where she searched for sprites and fairies. Her businessman father loved the wilderness, so every summer he'd take his family to a small, uninhabited and silent island in the Inner Hebrides archipelago, which is off the west coast of Scotland. There was no electricity, and the family lived a hunter-gatherer lifestyle and camped in tents for two weeks while there. By the time she was nine years old, her parents had built a stone house and her father had bought a boat, so they could stay all summer.

Cowell now lives in London and is married to her husband, Simon, and has three children: her daughters Maisie and Clementine, and her son Alexander.

How to Train Your Dragon Book Series

The island where the family called their summer home was also the first of the British Isles that the Vikings had invaded, and many Viking ruins still exist there. Cressida's father would tell stories around the campfire about the Vikings and legends of dragons. She enjoyed imagining what it would be like to be a Viking living amongst dragons. She had been convinced that there were dragons living on the island and has been fascinated by them ever since, and because of this, we assume its where she had her first ideas for her book.

She spent her time reading and writing stories, fishing, and searching for dragons. She first found her talent in children's entrainment while reading to her younger cousins and doing various voices for the story.

She wrote the first book in a tiny study off the sitting room of her present house shortly after moving in. She later had a shed built in the garden where she wrote the others. Her "Writing Shed" was a private place for her to write, draw, gain inspiration, make a mess, and even take a nap break as she even has a bed in the shed.

Recently after her first child had been born, she began writing How to Train Your Dragon, she states that it could have been titled "How to Train Your Child", given it's initially all about being a parent. Both in the cases of Hiccup trying to bring up Toothless, and Stoick trying to bring up Hiccup. She intended the book be all about relationships and how being a parent teaches empathy. Little did she know the success to come as she finished her book.

How to Train Your Dragon Franchise

Cressida also has had a small role in the making of the How to Train Your Dragon movies.

In May of 2012, she co-hosted the documentary How to Find Your Dragon, which was a behind the scenes look at the first film, as well as an introduction to the then-upcoming stage production How to Train Your Dragon Live Spectacular. It aired on Public Television in the United States, the UK, and Canada.

In March of 2017, DreamWorks bought the rights to her new book series The Wizards of Once, which is set in a world where wizards and warriors collide. It's to have the same type of adventure, action, and humor as her classic How to Train Your Dragon series. It's still unsure if DreamWorks plans make the new book series into a movie and/or TV series. The first of the books was released October 3, 2017, in the UK and the United States.

When asked by British magazine The Comet if she ever anticipated the success of the movie franchise, she answered:

Credits in How to Train Your Dragon 2. 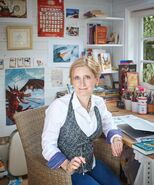 Cressida in her "Writing Shed"