How to Train Your Dragon Wiki
Register
Don't have an account?
Sign In
in: Plants, School of Dragons

Creeping Charlie is a plant seen only in the game, School of Dragons.

In the Franchise, Creeping Charlie appears to be a trailing plant without flowers. It has small oval-shaped leaves with some yellow color to them.

In reality, the common name "Creeping Charlie" can refer to several different plants, and it is unclear which the game makers had in mind. Two possibilities are: Glechoma hederacea and Pilea nummulariifolia.

G. hederacea is a member of the Mint Family (Lamiaceae) and is used as an ornamental, though it has become quite invasive in the United States. It is native to Europe and Asia. G. hederacea has a trailing habit with leaves roughly shaped like a kidney and rounded, toothed edges, which is different than what is seen in School of Dragons. When this plant flowers, they are typically a shade of purple.

P. nummulariifolia is also a trailing plant native to the Caribbean and Florida. In appropriate conditions, this plant will produce small inconspicuous white flowers. P. nummulariifolia has small heavily ribbed leaves, more similar to the plant in School of Dragons.

In School of Dragons, Creeping Charlie is used as decoration only. In reality, both P. nummulariifolia and G. hederacea are also used for decoration as houseplants, particularly in hanging baskets where both plants' trailing habit is exemplified.

G. hederacea also has some other uses. It can be cooked and eaten, and also has been used in making alcoholic beverages, a nutritious tea, and as a substitute for rennet in cheese-making. Medicinally it has been used historically in a variety of ailments from eye issues to disorders of the kidney.

Creeping Charlie is an item that the player can use to decorate the walls of their Hideout on Dragon's Edge. 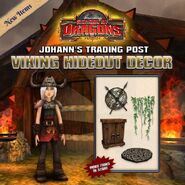