How to Train Your Dragon Wiki
Register
Don't have an account?
Sign In
Advertisement
in: Animals, Dragon Food, Wild Skies,
and 5 more

Crabs are a food source for dragons in the game, DreamWorks Dragons: Wild Skies, as well as food for Vikings in Look And Find: How to Train Your Dragon. Crabs are also mentioned in the game, School of Dragons.

Crabs are a type of crustaceans known for their large, single pair of pincers. They occur worldwide in a variety of environments - not only sea water, but also fresh water and land. Roughly speaking, they have an ovoid central body and ten legs radiating outward. Their diet depends on the species and can range from algae and bacteria to molluscs and fish. Like other crustaceans, crabs have no internal skeleton, but rather an exoskeleton. As they grow, they must shed this exoskeleton to compensate, and grow a new one.

In Dragons: Riders of Berk, crabs are a food item that can be eaten by humans. In DreamWorks Dragons: Wild Skies, crabs are an item that the player must collect to feed to dragons who favor it as a food.

In actuality, crabs are a popular food item across the world for humans. There is little evidence that crabs comprised a significant part of the historical Vikings' diet. However, as many Vikings utilized whatever sea creatures they had at hand along the coastlines, it is entirely plausible crabs were a known edible item. Two species of crabs are native to the northern seas that Vikings may have come across: the Snow Crab and the Brown Crab.

In "Night of the Hunters, Part 1", Snotlout mentions that he is allergic to sand crabs.

This children's activity book contains eight scenes for the reader to find hidden objects. In the third scene, there are various food items around the house at the Haddock home, including what appears to be crab stew, complete with red claws poking out of the stew pot.

While the riders are searching for Hookfang, Meatlug, Fishlegs and Snotlout fly into a giant wave. Snotlout remains with a crab dangling from his nose.

While Hroar is trying to tame Torch, he is thrown in the water multiple times by the dragon. Once, he remains with a crab attached to his nose.

Crabs are mentioned briefly in the "Wrath of Stormheart" Expansion. They are mentioned as examples of creatures with chitin exoskeletons. A few red-colored crabs are seen on the sea floor next to Vanaheim. 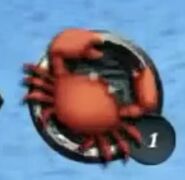 In Look And Find: How to Train Your Dragon