How to Train Your Dragon Wiki
Register
Don't have an account?
Sign In
in: School of Dragons, Characters, Humans,
and 5 more

Clueless is a young Viking originally from the How To Train Your Dragon book series that appeared in the School of Dragons game.

Clueless appears in School of Dragons along with Speedifist and Wartihog. During the Quest "History of the School", the Headmaster asks the player to retrieve notes from him. For this quest, Clueless can be found standing near The Lab.

Clueless also appears in the Quest, "Chocolate in a Bottle". Gobber's chocolate has hardened in a bottle and he can't get it out. Heather asks the player to collect chocolate from other NPC characters, including Clueless, to figure out the best way to get it out through experimentation.

In a player Quest of the same name - "Clueless Queries" - Clueless asks the player some questions, then return to Phlegma.

Clueless is a tall, lanky teenage boy. Though unconfirmed, he appears to have a blue tattoo over his right eye, He possesses long dark brown hair that stretches to his shoulders and wears a two-horned helmet. He wears a dark grey vest over a lighter tunic. He also wears two wrist guards and dark brown boots. 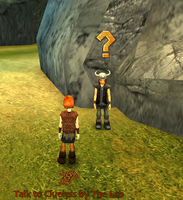 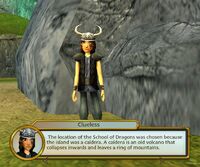 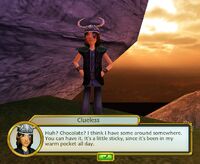