How to Train Your Dragon Wiki
Register
Don't have an account?
Sign In
Advertisement
in: Plants, Human Food, Dragons: Rise of Berk, Dragons: Titan Uprising

Clovers are a type of plant mentioned minimally in the DreamWorks Dragons Franchise.

Clovers are relatively small flowering plants belonging to the Genus Trifolium. They occur mainly in the Northern Hemisphere, but some species can be found in Africa and South America. Clovers are nitrogen-fixing plants, meaning they host bacteria which take nitrogen from the air on their roots and then 'fix' it into forms that can be accessed by plants in the soil.

Clover species are widely known for their three-lobed leaves. Occasionally, some species may produce a four lobed leaf, or even rarer - a five-lobed leaf.

Clovers are often referred to as 'Shamrocks' and figure prominently in the lore of Ireland. However, sometimes other trifoliate plants such as those in the Genus Oxalis are also called Shamrocks.

In the DreamWorks Dragons Franchise, clover is mentioned minimally in the context of folklore, especially seen in Dragons: Titan Uprising. Here and in reality, the trifoliate leaves have significance in representing the Holy Trinity in Christianity, because the three lobes represent the Father, the Son, and the Holy Spirit. Four-leafed clovers are considered a sign of good luck if found.

Clover is an excellent ground cover to promote soil health because of its ability to fix nitrogen. It is also a good crop for grazing animals. Humans can consume clover and clover flowers as well, though the plant may need to be boiled first to remove some of its toughness.

This game indirectly mentions clover. There is a special search location named Clover Coast, where presumably clover may grow.

There is a Clover Bed seasonal decoration that can be bought from the market for 150 Thawfest Pennons.

Clover is occasionally seen in promotional material for the game.

Clover, more specifically shamrocks, are mentioned in the description for St. Paddy's Toothless. It mentions clover as a symbol for a trinity god, as well as people celebrating by placing shamrocks in ale. 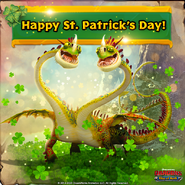 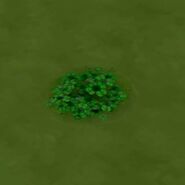