How to Train Your Dragon Wiki
Register
Don't have an account?
Sign In
in: Animals, School of Dragons, Dragons: Race to the Edge,
and 4 more

Clams are molluscs mentioned in the DreamWorks Dragons Franchise.

Clams are Molluscs in the Order Bivalvia, indicating they have two shells hinged together. Clam shells are generally equal in size and shape to each other.

There are clam species that live in freshwater, but the majority of species live in salt water environments. Many have a strong "foot" with which to burrow into the sand or silt in their habitat. Some species live along the coastlines and emerge at high tide, then burrow into the sediment at low tide.

Giant Clams are mentioned or seen on multiple occasions within the Franchise. The Giant Clam (Tridacna gigas) is native to the South Pacific Ocean and the Indian Ocean in coral reef areas. It is presently endangered due to over-harvesting and habitat destruction. Though very large in comparison to most species of clam, the largest specimen found was measured at 4 feet 6 inches. This is smaller than what is seen in the Franchise, but nonetheless huge in real life. Historical Vikings would not have encountered this species at all.

Both in the Franchise and in reality, clams are seen as a food source for humans. Additionally in real life, clam shells sometimes serve as collectibles. Historically, some clam shells were used as beads and currency to some Eastern Native American tribes.

In "Dragon Eye of the Beholder, Part 2", the Dragon Riders have found the Dragon Eye and bring it back to Berk to figure out its purpose. As Gobber tries to unlock it, he harkens back to an old memory.

Giant Clams are mentioned as a metaphor for Ruffnut's lips by Throk, as part of a poem in honor of her, in the episode, "Snuffnut".

During her imprisonment by Grimmel the Grisly, Ruffnut asked if he had clams as food before explaining how they are like little mouths with slimy food inside that's already chewed.

Clams are mentioned in the episode, "Crash Course" as something that Cutter the Relentless Razorwing would like to eat.

In "Treasure Riders", Waldondo del Mundo told a story about one of his adventures alongside Marena, during which the pair got stuck inside a giant clam, while searching for a black pearl.

Clams are mentioned briefly in one of the "Farm Jobs" a player can complete by raising and harvesting crops for coins. This one involves growing tomatoes.

Later, during the release of the Expansion, "Wrath of Stormheart", giant clams are seen off the coast of Vanaheim. They are to be utilized by the player for underwater swimming, as they have captured air in their shells for breathing, in game. In reality it is extremely doubtful clams could be used in such a way, or have air pockets within their shells.

Clams mentioned in a School of Dragons Farm Job 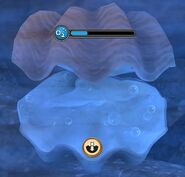