How to Train Your Dragon Wiki
Register
Don't have an account?
Sign In
Advertisement
in: Dragons: Rise of Berk, Dragons, Characters,
and 5 more

Chompers is an Egg Biter introduced in the How to Train Your Dragon Live Spectacular.[1] It later appeared and received its name in the game, Dragons: Rise of Berk.

The Vikings of Berk obtained Chompers as an egg in an undisclosed manner, before peace was made between them and dragons. Chompers was used as a training dragon for the young Hooligan Viking students. As is characteristic of the species, Chompers hatched and immediately bit Snotlout.

After peace was made between the Hooligans and dragons, Chompers stayed on Berk and grew into adulthood there.

Chompers is a bright red Egg Biter with yellow wing membranes and creamy yellow belly. There are darker red stripes on its back. It has a pale, creamy underbelly and brown legs.

Chompers, unlike typical Egg Biters, seek attention and love to be the in the center of attraction. Chompers can be rather aggressive, especially when other dragons try to steal its spotlight.

In How to Train Your Dragon Live Spectacular 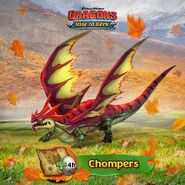 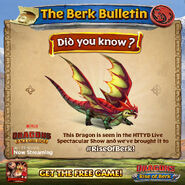 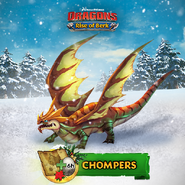 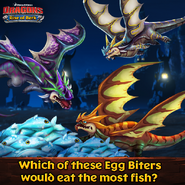 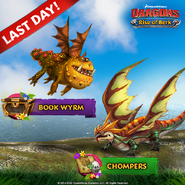