How to Train Your Dragon Wiki
Register
Don't have an account?
Sign In
Advertisement
in: Valorous Dragons, Dragons: Titan Uprising, Dragons,
and 10 more

The Chimerical Chamomeleon is a male Changewing appearing in the game, Dragons: Titan Uprising.

Chimetical Chamomelon is red with a pale yellow underbelly with brown stripes. He has yellow spots on his wings and yellow circles on his back and tail. Both the spots and the circles glow constantly. His eyes are yellow. 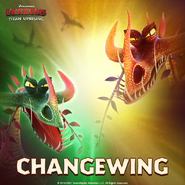