How to Train Your Dragon Wiki
Register
Don't have an account?
Sign In
Advertisement
in: Locations, Franchise Locations, Islands,
and 2 more

Chilblain, later known as Chilblain Mark II or New Chilblain, was an island near Berk. The people of Chilblain lived in a village in the foothills near Mount Ymir.

In "Snowmageddon", it was said that for over twenty years, the villagers of Chilblain traded their ore with the Berk's Hooligan tribe. They were able to deliver by means of their Slalom Sled through ice canals for many days. Like the Hooligan tribe they also fought dragons. Gobber also spent some time up there. It was there that Chief Hagan Frostbeard's daughter, Smulder fell in love with him but he did not reciprocate her feelings. However, Gobber was forced to leave.

After Berk made peace with the dragons, shipments from Chilblain were late. Gobber was able to convince Stoick, Hiccup, and the others to assist in helping the people of Chilblain. However, Frostbeard continued fightings dragons during the blizzard and briefly fired at Hiccup and his dragon riders. Gobber, Hiccup, and the other riders then entered the village to convince them to leave the village before more snow comes in. Hiccup and his riders then played a game of Snowmageddon with Kettil, Gunilla, and Frey.

Hiccup then showed Kettil Toothless and took him to Mount Ymir. There, Hiccup showed him how to train a Deadly Nadder. Smulder was able to convince her people to trust dragons and to leave the village before Ymir erupted. The villagers and Frostbeard were all saved by the dragons. Several days later, Smulder oversaw the rebuilding of the village with dragons. They also found new deposits of ore which would give them a bumper yield.

Five months after making their peace with the dragons, Chilblain was flooded with water. 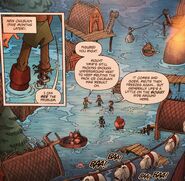