Chicklet is one of Chicken's eight offspring.

When Tuffnut finds out that Chicken has a secret family in "Searching for Oswald... and Chicken", he initially gets mad. However, when he lifts one of the chicks he quickly changes his mind. He decides to adopt the little chick, naming it Chicklet.

In "A Gruff Separation", Chicken's offspring are seen being trained on a tiny obstacle course by Tuffnut. The reason for this is not stated. Chicklet is not specifically named, but is assumed to be one of the several chicks seen.

In "King of Dragons, Part 1", while the Dragon Riders are packing their belongings, Chicken is seen with her offsprings in the background, presumably with Chicklet too.

Chicklet looks exactly like Chicken’s other offspring and any normal chicks: yellow, small, fluffy and round with an orange beak. 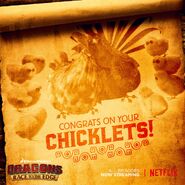 Ruffnut With Baby Chicks
Add a photo to this gallery

Retrieved from "https://howtotrainyourdragon.fandom.com/wiki/Chicklet?oldid=566878"
Community content is available under CC-BY-SA unless otherwise noted.