How to Train Your Dragon Wiki
Register
Don't have an account?
Sign In
Advertisement
in: Animals, Characters, Dragons: Race to the Edge,
and 6 more

Chicken's Mate is a Rooster that appears in Dragons: Race to the Edge, Season 5.

Before the events in "Searching for Oswald... and Chicken", Chicken and her mate were secretly meeting in the forest and eventually had 8 chicks. When Tuffnut found Chicken covering her prints, she led her owner and the other riders to her new family. While at the beginning Tuffnut was mad at her, he changed his mind and adopted one of Chicken's offspring whom he named Chicklet.

Chicken's Mate is larger than Chicken and has a brown cape of feathers, while his body has deep blue vivid feathers. He has a larger comb and wattle then her as well. He additionally also has long tail feathers that are the same deep blue as his body. 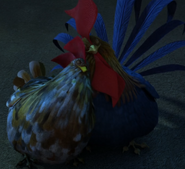 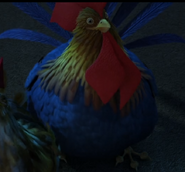