Cheesemonger is a Gronckle that appears in the game Dragons: Rise of Berk.

Cheesemonger is mostly yellow and orange, which is an unsual coloring for a Gronckle as they usually have several different colors complementing their scale shades. He does have a few shades of darker yellow in places, almost ranging to orange. He has brown speckles adorning his wings and brown claws. His eyes too are yellow. 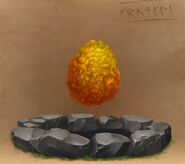 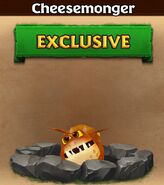 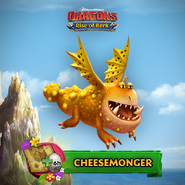 Retrieved from "https://howtotrainyourdragon.fandom.com/wiki/Cheesemonger?oldid=599305"
Community content is available under CC-BY-SA unless otherwise noted.