Charsoul is a male Monstrous Nightmare appearing in the game, Dragons: Titan Uprising.

Charsoul is bright crimson with yellow streaks and pattern along his wings, giving the appearance of lava veins. He has a glowing red underbelly which looks somwhat like coals, as it fades to black further on, and is shot through with luminescent yellow stripes. He has black shades and highlights all over his body, from his snout to his tail, with a subtle dark purple shade making its way through his wing tips. His claws, horns, and wing tips are black, whilst his eyes are yellow and orange. 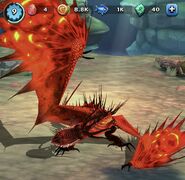 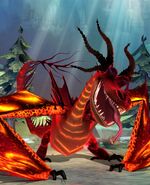 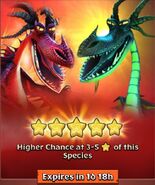 Retrieved from "https://howtotrainyourdragon.fandom.com/wiki/Charsoul?oldid=614217"
Community content is available under CC-BY-SA unless otherwise noted.