Gem of a Different Color

Changewing Island is a nesting ground and home for the Changewing dragons.

Changewing Island is a dense, forested island, with a thick stream winding through its depths. Its coasts are surrounded by precarious stacks of boulders, but with some sandy beaches.

The forested island had been used by Fishlegs Ingerman and his dragon Meatlug as a hangout in "Gem of a Different Color". There, they found a "Stone of Good Fortune". However, when Fishlegs and his friends decided to return the stone, they realized they were actually dragon eggs. Despite returning the egg, Snotlout Jorgenson and his dragon Hookfang stole four eggs.

Three years later, the teens went to Changewing Island to search for glowing Changewing acid to light up a new lens they found in the episode "Night of the Hunters, Part 1". They then encountered Tuffwing, a Changewing that Tuffnut managed to capture in order to obtain the Changewing acid. Eventually, they used the acid sprayed on Snotlout's helmet to power up the Dragon Eye.

After having been reunited with his mother and spending a day flying together, Hiccup tells Valka about his activity of mapping the world. While he is naming a few of his discorveries, Hiccup says he had discovered Changewing Island after locating Dragon Island. 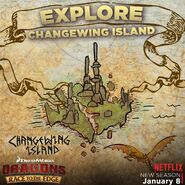 Retrieved from "https://howtotrainyourdragon.fandom.com/wiki/Changewing_Island?oldid=550843"
Community content is available under CC-BY-SA unless otherwise noted.