The Caves of Jotunn is a location seen in the Comic, Underworld, and is located on Berk. Hiccup jokingly refers to them as the "Bowels of Berk".

The Caves of Jotunn are a network of natural caves underneath the Isle of Berk. However, in the events of Underworld, they are greatly expanded on and mined by Captain Fiske and his crew, in order to destroy Berk.

The caves are large enough for dragons to fly through, and has an underwater portion that connects to the sea on the coast of Berk.

Captain Fiske attempts to mine out the Caves of Jotunn to make them unstable and cause Berk to collapse in a plot for revenge against Stoick.

Mentioning the Caves of Jotunn

Mentioning the Caves of Jotunn 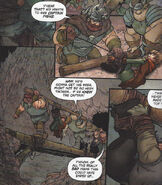 Retrieved from "https://howtotrainyourdragon.fandom.com/wiki/Caves_of_Jotunn?oldid=512200"
Community content is available under CC-BY-SA unless otherwise noted.