Blanchett was born on May 14th, 1969 in Melbourne, Victoria, Australia to an Australian mother and an American Father Blanchett gained international fame as the title character of the 1998 historical biopic Elizabeth.  She is also well known as the elven queen Galadriel in The Lord of the Rings film trilogy (a role she reprised in The Hobbit film trilogy), and Hela, the Goddess of Death, in Thor: Ragnarok.

Her other voice work includes the roles of Gramamere in the English-dubbed version of the film Ponyo, the roles of Penelope and Queen Elizabeth II on Family Guy.

Cate with Toothless on the red carpet 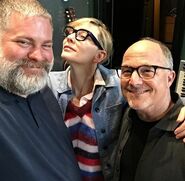