How to Train Your Dragon Wiki
Register
Don't have an account?
Sign In
Advertisement
in: Animals, Pets, School of Dragons,
and 5 more

How to Your Dragon (mentioned)

Cats are a group of mammals that are kept as pets by some Vikings.

Domestic Cats (Felis catus) are small mammals that are both efficient solitary predators and also prey for larger predators. They have a wide range of colors and color combinations from yellows/oranges/reds and white/greys/black, as well as cream and chocolate brown. For the most part they have long tails for balance and erect ears, though these may vary depending on breeding. Cats were domesticated from the African Wild Cats over 8,000 years ago. Unlike domestic dogs, cats for the most part retain many of their original and wild characteristics. Small mammals such as rodents are the primary prey of cats, but they will also hunt birds, reptiles, amphibians, fish, insects, and other small creatures.

Cats are obligate carnivores and comsume a wide array of smaller animals. Small mammals such are the primary prey of cats, such as mice or rats. They will also hunt birds, reptiles such as small lizards, snakes, amphibians, fish, insects like butterflies or flies, and other small creatures. Cats are also opportunistic and may find edible things in garbage.

Cats are animals kept as pets and companions, but they also have an important function of keeping vermin away that might destroy human food stores, like mice and rats.

Cats in the Viking age were most likely rather large and robust, and sported a long thick coat to withstand the cold climate. The modern-day breed of the Norwegian Forest Cat is thought to approximate the cats Vikings may have had. With this in mind, cats figured in Norse Mythology. The most notable cats were the two that pulled a chariot for the Goddess Freya. Because of their association with Freya, kittens were a common gift to brides on their wedding day in hopes that their presence in the newlyweds' home will improve her fertility.

During the training session with the Deadly Nadder, Hiccup interrogates Gobber about Night Furies, and asks if they're nocturnal like cats.

This children's activity book contains eight scenes for the reader to find hidden objects. In the third scene, there are various items around the house at the Haddock home, including a "Sabertooth cat tusk". Saber-toothed Cats are a large extinct group of felines. It is highly unlikely a Viking would have come across a fossil, but not impossible.

A tabby cat appears in this movie short. It sits in the woods near the house of Bork the Bold, watching his tribulations with Dragons, then takes advantage of what's leftover of a fish after Bork gets burned by a dragon. It is not clear if this cat is a pet cat to Bork.

As Gobber is slashing through a forest of what appears to be bamboo in an unnamed land with his egg-beater hand attachment, he says "I carved through that thick brush as fast as a jungle cat. Still, the Boneknapper was right behind!" There is actually a species of wild feline called the Jungle Cat (Felis chaus).

In the episode "Snotlout Gets the Axe", when Snotlout accidentally drops the Jorgenson Ceremonial Axe in a tree on Dragon's Edge, a scared cat is heard.

In "Follow the Leader" when Tuffnut throws off an empty bottle of Nightmare gel, a scared cat (possibly the same from "Snotlout Gets the Axe") is heard in the background.

In the episode "Gruff Around the Edges", Tuffnut is holding Hiccup's shield when he accidentally opens the crossbow and shoots an arrow, after which a cat is heard yowling, and Tuff embarrassingly hands the shield back to Hiccup.

In the episode "Snuffnut", yet another cat is heard screaming in the background as something is thrown. Hiccup escorts an angry Astrid off-screen, after hearing that Throk has rather primitive views of women in marriage. She is heard hurling or breaking something, followed by a cat scream.

In the episode "King of Dragons, Part 1", another cat is heard when Gruffnut wants to take the jewels in a dragon hunter ship and accidentally activated a trap, and a cat's scream is heard.

In "Grumblegard, Part 1", Marena mentions using a peculiar dance with clapping to put a baby tiger to sleep. She uses it to quiet a pair of deafening Baby Shriekscales.

Tigers are mentioned in the description of Grim Whirlwaft.

Marooned Flambo's excitement for entering a fight is described as "the passion of a thousand hungry panthers."

This game only very minimally mentions a feline - the Lynx. There is a species of Lynx - the Eurasian Lynx (Lynx lynx) - native to Scandinavia. There is a Stable Quest called "Lynxes, Penguins, Oh My!" in which the player sends dragons to help Fishlegs catalogue the fauna of islands nearby.

A cat is also used in the brief rhyming description of turkey feathers in the Produce section of the Store.

In the "Hidden World" Expansion, Harald Forkbeard uses cats and mice to describe a situation wherein the player and himself are sneaking into a deadly situation.

The Razorwhip Slash-Dasher is described as curling up like a great ironclad kitten while her tail is being filed, according to this game.

The phrase Like a child in a puddle of kittens is used to describe how the Knavish Voltknapper like to surround itself with human companions.

The concepts of several of the Dragon species are in part based on the cat.

The development of Toothless (and by extension, Night Furies) has involved cats in many aspects. According to Dreamworks' Youtube Video Series, "The DreamWorks Download", Toothless' color is based on a Black Panther cat (Panthera sp.). His movements, which are very fluid and mammalian, are based on a cat, specifically one animator's black cat. Toothless' eyes are based on a mix of Wolf and Cat. Even his vocalizations are based in part on Cats and Tigers, among other animals.

Writer and Director Dean DeBlois describes the Hideous Zippleback as a Siamese cat combined with a snake.

The Bewilderbeast is in concept part "regal lion" , plus a few other animals, according to Simon Otto.

Lynx mentioned in School of Dragons 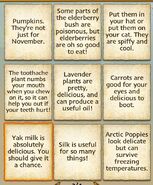 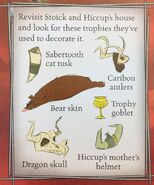 Sabertooth Cat Tusk in Look And Find: How to Train Your Dragon

In Book of Dragons