A Captured Singetail appears in the game School of Dragons during the expansion Return to Dragon Island.

Shortly before the events in Return to Dragon Island, this Singetail was captured by the Dragon Hunters and brought to Auction Island, where he was going to be sold during an auction.

When the player and Eret go to Auction Island to find more information about Harald Forkbeard, they hear about the Captured Singetail and decide to free him. While Eret distracts the hunter who was guarding the cage, the player solves a puzzle and opens the cage the Singetail was kept in. The dragon then runs away into a cave on the island.

Later, on Dragon's Edge, Valka, Hiccup and the player try to tame the wild Singetail. He then makes a distress fire, calling other Singetails. The player then tames the now freed Singetail, showing the other dragons that he/she means no harm to them. The Singetails leave, with the except of the one that was captured, which becomes one of the player's dragons.

The Captured Singetail is a typical-looking for his species. He is red with pink patterns on his wings. 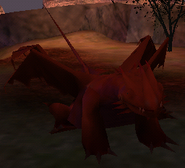 Retrieved from "https://howtotrainyourdragon.fandom.com/wiki/Captured_Singetail?oldid=388898"
Community content is available under CC-BY-SA unless otherwise noted.