A Captured Quaken first appears in the third expansion pack of School of Dragons, "Battle for the Edge".

After Harald betrays the Dragon Riders, Snotlout tells the player to go to Dark Deep and check on Fishlegs. When the player arrives, Fishlegs informs him/her that the hunters took the Quaken but left the Prickleboggle. Fortunately, the player manages to infiltrate into the Dragon Hunter camp, with the help of Harald. The player finds the Quaken in a cage, with Dragon Root arrows. The player takes them off and opens the cage. The Quaken then angrily destroys the Hunters' camp and breaks out, returning to Dark Deep.

In the School of Dragons Expansion, "Wrath of Stormheart", the (formerly) Captured Quaken defends Dark Deep when Nikora's soldiers attack the island. He is struck by some sort of poison, and his companion Prickleboggle is exhausted from fighting. The player brings fish to the Prickleboggle to boost his energy to heal the Quaken. The attack on Dark Deep was only a diversion while Nikora took over Auction Island.

This Quaken has a different coloration than most of its species. He is light gray with red spots all over his body. 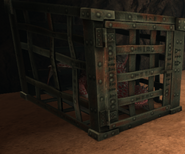 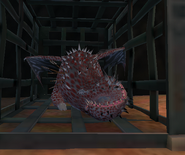 Retrieved from "https://howtotrainyourdragon.fandom.com/wiki/Captured_Quaken?oldid=570476"
Community content is available under CC-BY-SA unless otherwise noted.