Camicazi is one of Hiccup Horrendous Haddock III's best friends. She is a fierce sword-fighter from the Bog-Burglars, a tribe of female Vikings, and the heir to their chief, Big-Boobied Bertha.

Camicazi makes her first appearance. She meets Hiccup and Fishlegs when they are imprisoned by the Romans in Fort Sinister. Like Hiccup, she is one of several Viking heirs that the Romans have kidnapped in order to foment mistrust and war between the various tribes. At first mistaking Hiccup and Fishlegs for Roman spies, she attacks them with her sword, and develops grudging respect for Hiccup when he proves to be a competent sword fighter.

Declaring that Bog-Burglars are the world's greatest escape artists, she hatches various breakout plans, all of which fail:

After this third plan fails, she eventually gives up, but then Hiccup hatches a plan with the help of the self-proclaimed Nano-dragon "god" Ziggerastica. After Hiccup helps them escape by posing as Thor with the help of the Nano-Dragons, they quickly escape. During their escape from a Roman amphitheater, Camicazi is nearly eaten by Sharkworms, but Hiccup rescues her.[1]

Quest for the Potato

Camicazi later joins Hiccup in his sleigh to Hysteria to search for the potato to cure Fishlegs after competing in a smashsticks on ice tournament . They all climb onto the roof and while Hiccup distracts the Hysteric tribe by falling into their cauldron of soup from the roof, Camicazi descends into the room using her burglary equipment and hides on a rafter before going to sleep. After Toothless sets the room on fire, Camicazi wakes up and picks the lock on Hiccups cage, freeing him. Then she successfully steals the potato and also the Ticking Thing but overbalances Norbert's Papa setting off the Squealers which wakes up Norbert. She then fights Norbert before outwitting him by hiding back up in the rafters and knocking him out with his own potato. Camicazi then escapes with Hiccup by tobogganing down from the Great Hall to the Harbor. They sleigh back to Berk but are caught by Norbert who was about to kill them but changes his mind after Hiccup rids him from the Doomfang. Camicazi returns with Hiccup to Fishlegs who isn't ill but Hiccup is and she witnesses Fishlegs cure Hiccup by shooting him with the arrow.[2]

Quest to Stop the Volcano from Exploding

Camicazi returns to Berk to attend the thing; a meeting of all the local Viking tribes before helping Hiccup, Fishlegs and Humongously Hotshot the hero to try to stop the volcano from exploding. At the meeting Camicazi steals the fire stone during the scrum to allow Hiccup to address the crowd and persuade the Vikings to help him to stop the volcano from exploding. She later steals the stone from Stoick after her reclaims it an attempt to belittle Hiccup. She is ashamed that the Bog Burglars are fleeing while the Hooligans never surrender. Camicazi joins them in stealing the Peregrine Falcon and sailing to Lava Lout island before climbing to the summit to drop the fire stone into the volcano. However on the way they all meet Alvin the Treacherous and Camicazi hides the stone in her waistcoat. She, along with Fishlegs fight the exterminator dragon but is captured but long after Fishlegs. She joins Hiccup in singing while waiting for their impending doom. Camicazi almost gets the retrieves the stone before it is knocked out of her hands by Toothless and then snatched by Alvin after rolling down the mountainside. Camicazi and Fishlegs fly to the Pergrine Falcon on Humongous's white dragon. Camicazi returns to her homeland with her tribe.[3]

Quest to Save Toothless from Exile

After Toothless incinerated the only copy of How to Train Your Dragon on Berk, Camicazi joined Hiccup and Fishlegs in their quest to steal another copy so Stoick wouldn't banish Toothless. Camicazi persuades Hiccup and Fishlegs to in turn 'borrow' Big-Boobied Bertha's stealth dragon that she in turn stole from Madguts the Murderous. The stealth dragon drops them off at the only window to the library and Camicazi and Fishlegs manage to get in without anyone noticing but Hiccup causes the four hundred guards and driller dragons look up and take notice. The window then becomes blocked when a driller dragon unsuccessfully attempts to kill them. Camicazi then introduces the boys to her dragon the Stormfly, who promptly guides them to the animal training section. After retrieving the book the trio and greeted by the Hairy Scary Librarian who engages Camicazi and Hiccup in a sword fight who after some help from Fishlegs eventually wins but at the cost of Stormfly's memory who was knocked out by one of the swords when the Librarian fell. Camicazi was very relieved when Stormfly recovered. All three wander around the library searching for the exits and eventually discover a hidden exit filled with poisonous Piffleworm dragons. Eventually the trio find the stealth dragon and their way back to Berk and promptly squash the Librarian who was attempting to kill Camicazi's mother and Hiccup's father. Bertha scolds Camicazi for pilfering her stolen goods and Camicazi admires Hiccup for his fluent lies to Gumboil and Madguts. Camicazi joins Hiccup, Fishlegs and the rest of the Hooligan and Bog Burglar tribes for Hiccups birthday feast.[4]

During an inter tribal friendly swimming race Camicazi was kidnapped along with Hiccup and Fishlegs by Raptortongues and taken to Norbert the Nutjob who she had previously stolen a potato from. They were taken to America with the Hysteric tribe due to Hiccups ability to read the ticking thing and guide them to America and this saved them from death by axe. Camicazi thinks up several escape plans all of which Fishlegs scoffs at and is extremely worried when Hiccup falls down the slave hatch. Initially against the idea of escaping with the slaves on board the American Dream 2 Camicazi helps steal the keys to open the slave hatch. Camicazi takes over the steering of the ship during the night time escape but loses control of the wheel when the Stormfly wriggles in her sleep. During the disruption that follows the slaves escape without them and Hiccup causes a Leviathorgan to follow the ship. Camicazi is now seen pedaling the Keep the Boat from Sinking and Scare away Monster Sea Creatures Machine which Red Ronald practically cried as he was so grateful she wouldn't tell Norbert. The trio then hide in the crows nest to escape Norbert's wrath. When America is in sight Hiccup tricks the crew into fighting each other and Camicazi and Hiccup both fight Norbert and Camicazi steals back the ticking thing. Camicazi and Fishlegs are washed off the ship by the force of the wave when the Leviathorgan attacks the ship. Camicazi witnesses Hiccup and Norbert's final sword fight. Camicazi attempts to rescue Hiccup from drowning when he dives off the ships masts into the sea but Fishlegs gets to him first.. Together Camicazi and Fishlegs heave Hiccup onto a table and start to swim away from America and into the open ocean where they eventually meet the wanderer slaves they helped escape, who promptly welcome the three Vikings aboard and take them part of the way back to Berk and they fly the rest of the way in Norbert's flying machine that was rescued from the waves. Camicazi, Fishlegs and Hiccup have the honor of being the last men and woman back from the race where Camicazi witnesses Hiccup being crowned the last man back and she returns home with the rest of the Bog Burglars.[5]

Camicazi was lost at sea during a storm (How to Break a Dragons Heart) whilst sailing in her boat the Stormy Petrel, before being captured by UG and kept as a prisoner on Berserk. Camicazi attempted to sing the Bog-Burglar national anthem whilst in her tree prison but unfortunately it could not be heard outside diminishing hopes of rescue. During her stay in the tree prison Camicazi worried about her dragon Stormfly who had been taken by UG and did not worry about her chances of escape despite not being able to dig anywhere or open any of the locks. Hiccup managed to rescue her with a key that opens all locks because she dropped a trail of winkles which Toothless could follow and Hiccup guessed that the trail was a result of her quick thinking. Camicazi was extremely grateful to be let out and let out a whoop of excitement when she realized that she was being set free. She eventually helped Hiccup to destroy the Berserk Village by threatening the Berserk Chief with her sword claiming to kill him unless he succumbed to Hiccups demands and insulting him by telling him her age which caused him to feel quite pathetic. Camicazi managed to kill three Berserks although she did have the advantage of dropping down on them from above. Camicazi was disappointed when they were met by the Hooligan tribe that Stoick made her return with them to her mother rather than stay and spill some more Berserk blood. She was pleased when Stormfly was safely returned to her at the end of the novel.[6]

At Flashburn's School of Swordfighting

Hunt for the Dragon Jewel

Camicazi is hyperactive and somewhat overconfident, but also very brave and loyal to her friends. Like all Bog-Burglars, she is generally disdainful towards men, including the Hairy Hooligans, but is one of the few people who has a healthy respect for Hiccup's abilities and his bravery.

There's virtually not much information about this character in the book; however, there have been some appearances of her hair and clothing based from the books and fanart. Camicazi has blonde hair like Astrid's with bangs parted from the left. She wears gold arm bands, bracelets, hoop earrings, and an emerald-bedazzled necklace. She also wears a sleeveless, red-orange tunic with her sword tied around her waist, light blue fuzzy shoulder guards, and tan fur boots with stripping.

As both a Viking and a member of the Bog-Burglar Tribe, Camicazi has several useful skills and abilities that have allowed her to survive against many enemies more experienced than her and help Hiccup in his many adventures: 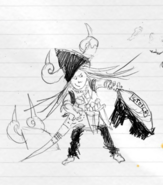 Camicazi with many possessions she stole.
Add a photo to this gallery

Retrieved from "https://howtotrainyourdragon.fandom.com/wiki/Camicazi?oldid=218375"
Community content is available under CC-BY-SA unless otherwise noted.