The Serpent's Heir
The Son of a Dragon

Calder is the main antagonist in the graphic novel, The Serpent's Heir.

In the aftermath of the war against Drago Bludvist, Calder travels to Berk, acting as an ambassador or emissary for Nepenthe. He asks to speak with Stoick the Vast to beseech help for his people, not knowing that Stoick was recently deceased. He appears fairly unafraid of Berk's dragons which is somewhat unusual. Calder addresses Hiccup as Berk's Chief instead, asking for him to come to Nepenthe to investigate the frequent tremors and bodiless dragon growls there.

The Dragon Riders arrive at Nepenthe and are unable to find the source of the tremors. At a final meal, Calder poisons most of the dragons and Dragon Riders. Calder imprisons them and seeks to take Toothless' wings to complete his personal "transformation" into a dragon. Calder believes he was meant to be a dragon and believes the tremors are a sign for his "transformation".

Despite the destruction of his land and people, Calder continues to harass Hiccup in his pursuit of transformation. He has taken and wields Hiccup's Inferno blade. Hiccup throws a canister of Zippleback gas at the blade, exploding on Calder. Calder falls off a cliff in a blaze of fire.

Calder is a troubled person who believes beyond reason that he was meant to be a dragon and not human. He feels that he must "evolve". His desire blinds him to the dangers to himself and his people, and feels justified in using devious means to achieve his "Evolution".

Calder has blonde hair and blue eyes, and appears to have dark eyebrows. He wears a long cloak to hide his extensive tattoos. The tattoos are to make him look like a dragon, and are green scale designs with stylized wings on his shoulders. 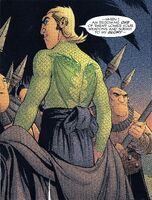 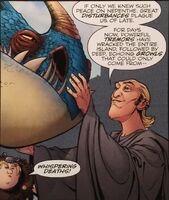 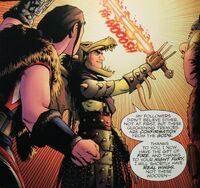 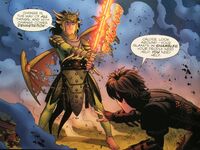 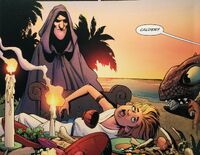