How to Train Your Dragon Wiki
Register
Don't have an account?
Sign In
Advertisement
in: Animals, School of Dragons, Dragons: Titan Uprising,
and 4 more

Butterflies are insects mentioned briefly in the game, School of Dragons, and then again in the Dragons: Race to the Edge episode, "Mi Amore Wing".

Butterflies are winged, six-legged insects of the Order Lepidoptera, Suborder Rhopalocera. They are characterized by intricately colored and designed wings in the adult stage, and caterpillars in the larval stages. Wing shape and coloring can vary widely from bright colors to dull camouflage colors. Butterflies have a long proboscis mouth part for extracting nectar from flowers. When not in use, this proboscis is often coiled up.

The larval stage - caterpillars - usually eat plant material other than flower nectar such as leaves. As such, some species can be a major pest of farmers, gardeners, and their crops.

In the game, School of Dragons, butterflies are part of a legend told in the "Call of the Deathsong" Expansion.

In actuality, butterflies are popular in art and stories, and are sometimes used as collectibles.

In the episode, "Mi Amore Wing", Queen Mala and Chief Dagur the Deranged have fallen in love. They call each other a variety of pet names. One Mala calls Dagur is "butterfly".

In the episode, "Grumblegard, Part 2", a pink butterfly is seen flitting around The Roost's yard and alights on the muzzle of a baby Slobber Smelter.

In "Mecha-Menace", various Luck Lanterns had butterflies and caterpillars painted on them, during the Spring Festival.

In "Summer Holiday", unidentified species of butterflies were seen on the exotic island described by Summer.

In "Belly Flop", Burple was distracted by a passing butterfly while standing guard at the entrance of the Roost.

Beltane Butterflies were introduced in this game with the 1.48 update as a seasonal currency, which can only be used for a limited time. Beltane Butterflies could be obtained from Gobber's Duties, daily logins, and Gauntlet Events, and could be used to buy certain dragons, costumes, and seasonal decorations.

In the "Call of the Death Song" Expansion, Heather tells the player of a story called the "Legend of The Dragon Valkyrie", which tells the mythological creation of the Death Song dragon. This story involves a woman who loved butterflies, explaining why she would eventually turn into the Death Song, as its appearance is very similar to a butterfly.

The life cycle of a butterfly is illustrated as part of a puzzle in Loki's Mirage.

Butterflies of various colors appear in the landscape on the island of Havenholme.

Butterflies are mentioned in the description of the Crimson Goregutter Bulwark.

Butterflies are also mentioned in the description of the Windgnasher Galegrinder. A butterfly that happened to have ragweed pollen on its feet landing on Galegrinder's nose was the catalyst for a series of events that led to the banishment of Eirik the Unscalded from Haukadalr. After his reawakening from unconsciousness, Galegrinder simply returned to chasing butterflies.

The dragon species Death Song was inspired by a butterfly in terms of coloration. 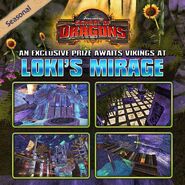 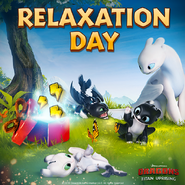 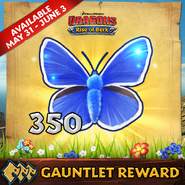