How to Train Your Dragon Wiki
Register
Don't have an account?
Sign In
Advertisement
in: Dragons, Dragon Species from the Books, Sky Dragon Class,
and 8 more

The Bullrougher is a prized Sky class riding dragon appearing in two books in the How to Train Your Dragon Book Series, as well as The Incomplete Book of Dragons reference book.

Based on pictures of Bullroughers, they appear to be stocky, solid dragons. Many seem to have a single, spiral horn sprouting from their muzzle, while other like the one pictured in the infobox at right, have a straight horn on their nose and another on their foreheads. Some have ear pinna (flaps), while others do not. Bullroughers are said to be well armored.

Bullroughers are trainable and are prized by Viking warriors for riding and battle.

Bullroughers sided with humans during the Dragon Rebellion.

While Gobber the Belch had the Hairy Hooligan Novices out learning how to herd Reindeer with their hunting dragons, a fire broke out, surrounding him and the students. Gobber's Bullrougher, Goliath, took out the students one or two at a time from the flames. The fire was caused by Exterminator dragons. When only Hiccup and Gobber were left, the Exterminators moved in and struck Goliath in the chest, killing him.

In the final battle between humans and dragons, Stoick the Vast is shown to ride a Bullrougher named Bullheart.

Bullroughers are detailed in this reference book for the How to Train Your Dragon Book Series. They are also mentioned in the stat table at the back of the book. 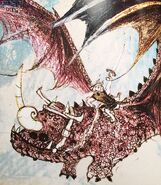 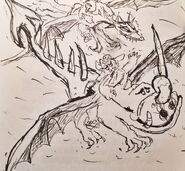 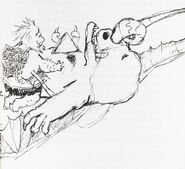