How to Train Your Dragon Wiki
Register
Don't have an account?
Sign In
Advertisement
in: Dragons, Dragon Species from the Books, How to Betray a Dragon's Hero,
and 4 more

The Bullguard Slavedragon is nominally featured in How to Betray a Dragon's Hero as a Riding Dragon for Alvin the Treacherous and his mother Excellinor the Witch, and again in The Incomplete Book of Dragons.

Bullguard Slavedragons are heavily armored, making them somewhat slow, but excellent for riding into battle. Like Tonguetwisters, they have multiple eyes in their head.

Bullguard Slavedragons have whiskers. Perhaps, in addition to detecting movement, they help safeguard their multiple eyes.

Bullguards also have some dimorphism amongst members of their species. There are "King" and "Queen" Bullguards. The Queen in particular is noted to be much larger than other Bullguards. It is unclear if King Bullguards are also larger.

Bullguard Slavedragon eyes are capable of X-ray vision, according to The Incomplete Book of Dragons.

As might be assumed from a dragon, Bullguards can breathe fire

However this is not their only weapon. They can also shoot lightning bolts, an abilty they use particularly conjunction with other Bullguards to cut off a target's escape route.

According to The Incomplete Book of Dragons, pepper can deter a Bullguard because of the sensitivity of their multiple eyes.

Bullguard Slavedragons are trainable as riding dragons, as seen in How to Betray a Dragon's Hero when Alvin and Excellinor ride out after Hicup on them. Bullguards are often used specifically for battle due to their armored bodies.

Bullguards are mentioned and seen briefly being ridden by Alvin the Treacherous and his mother Excellinor, as they pursued Hiccup and the King's Lost Things.

Bullguards are detailed in this reference book, as well as listed in the Dragon Key table at the back of the book. 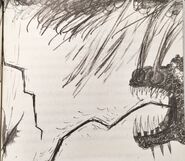