Buffnut appeared in the Game, How to Train Your Dragon for the Nintendo DS, 360, and Wii.

About a year after the defeat of the Red Death, Chief Stoick sets up a tournament to showcase dragon training. Part of the preparation for the Tournament is for the contenders to collect three flags from other contestants. Astrid or Hiccup (depending on which character the player chooses) finds Buffnut in the Marsh and challenges him to a fight for a flag. Buffnut has five flags because Snotlout traded him for just one flag and told him they could be friends. In the Game, Snotlout is frequently lying and cheating to get ahead in the Tournament.

Buffnut hands a flag over after the fight, and later fights with Hiccup or Astrid again in the Tournament Arena. Buffnut and his unnamed Grapple Grounder are defeated again. Snotlout becomes angry and reneges on his offer of friendship, as he was only using Buffnut to defeat Astrid or Hiccup so he wouldn't have to fight them.

Later, Buffnut encounters Astrid or Hiccup again in the Lava Caves, and expresses remorse for being duped by Snotlout. However he still has a competitive streak and challenges Astrid or Hiccup to a dragon duel, this time with his unnamed Night Fury (in this game, Night Furies are as common as the other dragons and characters can train multiple dragons).

Astrid or Hiccup fight Buffnut's unnamed Grapple Grounder in the Tournament Ring. He congratulates Hiccup or Astrid on their win.

Note that if a Rider's dragon appears multiple times, the dragon may have feature variations, but the species and color stays the same. 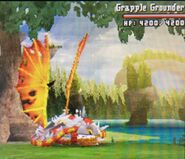 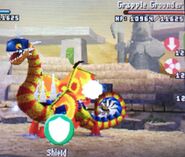