How to Train Your Dragon Wiki
Register
Don't have an account?
Sign In
Advertisement
in: Dragons, Dragon Hybrids and Subspecies, Dragons: Titan Uprising,
and 4 more

Dark blue and violet
Gold and silver
Pink and red

The Brooding Boltstamper is a hybrid between a Rumblehorn and a Skrill that first appeared in the game, Dragons: Titan Uprising.

Brooding Boltstampers possess the built of a Rumblehorn, while their head, as well as wings, are a mix between their parental species. Similar to the Skrill, they have sharp, metallic spines running down their backs to their tails.

Brooding Boltstampers have very thick skin, even more so than their parents' species, which protects them from strong attacks.

Brooding Boltstampers inherit the tracking skills of their Rumblehorn lineage, enabling them to track fleeing enemies for miles.

The Brooding Boltstamper's behavior falls somewhere in between that of each parent, though behaviorally they tend to favor that of the Rumblehorn more than the Skrill. Though they are more level-headed, they can be quick to anger and also charge into battle fearlessly.

Brooding Boltstampers in the Wild Woodland 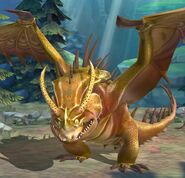 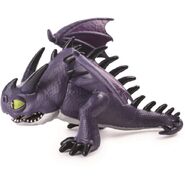 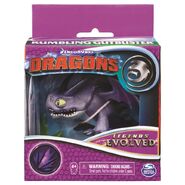