How to Train Your Dragon Wiki
Register
Don't have an account?
Sign In
Advertisement
in: Dragons: Rise of Berk, Locations, Franchise Locations,
and 2 more

Area on the Isle of Berk

The Brokkr's Hold is a land expansion area on Berk seen in the game, Dragons: Rise of Berk.

Brokkr's Hold is an area adjacent to the Green Death's volcano and the Great Forge. It's full of rocky terrain in the form of rocks, rock spars, and rocks and stone crags that the player must remove. It is a wooded area containing saplings, thickets, groves, woodlands, forests, and coppices, which the player must also remove. Brokkr's Hold is also bordered by cliffs in front of the sea. It appears to only be accessible by flying Dragon or by ship.

The player must complete the Quest "Looking Back" in order to access the Brokkr's Hold land expansion area.

The player needs to have a population of 2,000 Vikings and spend 350,000,000 Wood or 3,000 Runes (in-game currency) to access Brokkr's Hold. Building time takes 5 days. Once completed, the player must remove obstacles - rocks and trees - to make space for buildings and dragon roosts. 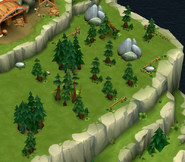 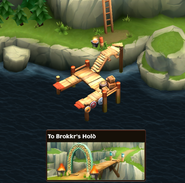