Breakneck Bog is an island that appears in the Riders of Berk episode, Breakneck Bog. The Dragon Riders first discover the Smothering Smokebreath dragon on this island.

Breakneck Bog is an island located in a group of different islands supposedly in the shape of a man's hand, Breakneck Bog being the thumb. The island has many dark rocky pillars and many caves. There are trees and deciduous bushes, as well as patchy grass. There is also a lot of fog, because of the Smothering Smokebreaths.

Dragons: Rise of Berk describes Breakneck Bog as having "jagged rocks" and "twisting vines" causing passage across the island to be treacherous.

According to Ruffnut and Tuffnut in "Breakneck Bog", Breakneck Bog is home to a fog monster. However, Astrid's grandfather believed it was pirates. Trader Johann inadvertently took his ship too close to Breakneck Bog and was taken by the fog monster. The Dragon Riders arrive at the island to rescue Johann. There, they discovered that the fog monster was really a pack of Smothering Smokebreaths. They were able to retrieve the chest Johann had from them and left the island.

In "Smoke Gets in Your Eyes", the Berserker Tribe took a Smothering Smokebreath nest from the island and placed it on Berk to destroy their stock of metal weaponry, making Berk much easier to attack. However, the plan failed and Johann took the adolescent Smokebreaths back to the island.

Snotlout Jorgenson is entrusted with the Jorgenson Ceremonial Axe, but loses it to the metal-wanting Armorwing Dragon. In order to get it back, the Dragon Riders retrieve some Smothering Smokebreaths from Breakneck Bog to take away the Armorwing's metal objects, in the episode, Snotlout Gets the Axe.

Breakneck Bog is mentioned in the description of the Fireworm Queen Fearsome Flamellion. After managing to escape from Viggo Grimborn, the alchemists Sif the Shrewd and Hrafnkel Ravenhood fled to Breakneck Bog, where it is said that they married and eventually combined their alchemical work to create the Philosopher's Stone.

In Riders of Berk (from afar) 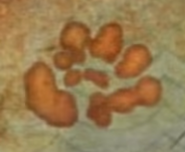