Bradford Clark Lewis is an American film producer, animation director, actor and local politician. He is also one of the producers of How to Train Your Dragon: The Hidden World.

Born and raised in California, Brad Lewis attended Fresno State University. After graduating with a Bachelor's of the Arts in Theater, he went on to work for such companies as Pacific Digital Images for thirteen years, Pixar, Digital Domain, Warner Brothers, and currently DreamWorks Animation.

When not at work, Brad Lewis raised his two children, a boy, and a girl. He also took part in the local politics of San Carlos, becoming mayor in 2007. 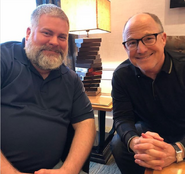