The Bork Week Nadders are a group of Deadly Nadders who first appeared in "We Are Family, Part 1" and then in the game, Dragons: Rise of Berk.

Performing for a Parade

Astrid used a dragon call to call a group of Deadly Nadders to train for the Bork Week parade. Stormfly flew up to join them for a short flight.

Astrid later came to tell Hiccup that she and Stormfly had trained her Nadders to fly in perfect formation. They demonstrate this immediately after as the Nadders fly over in V formation, with even their wing flaps perfectly synchronized.

Later on, once the Riders had managed to rescue Hiccup from Outcast Island, the group of Deadly Nadders performed in the parade, flying in formation behind the Dragon Riders.

The Bork Week Nadders are all representative of their species. The individual Nadder seen in Dragons: Rise of Berk is a grayish-green in color with red feet, a patch of yellow under its tail, and yellow horns and tail-spikes. 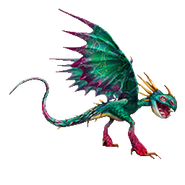 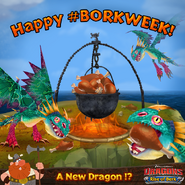 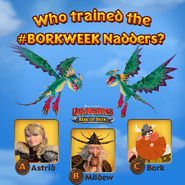 Mentioned in School of Dragons

Retrieved from "https://howtotrainyourdragon.fandom.com/wiki/Bork_Week_Nadders?oldid=372799"
Community content is available under CC-BY-SA unless otherwise noted.