The Boneknapper is a large Mystery Class dragon that was first mentioned in How to Train Your Dragon and first appeared in Legend of the Boneknapper Dragon.

Early concept art from Nico Marlet resemble a Sword Stealer more, as the dragon appears to have arrows, chains and an axe attached to its very body.

Eventually, the Boneknapper's head evolved into one more similar to that of a Monstrous Nightmare. One by Nico depicted a triple-split tail and two pairs of wings. Most of the design development centered around the bone placement, as well as the type of bones used for the dragon. Most, for example, depicted a smaller skull at the tip of its tail, or larger bones along its vertebrae.

The Boneknapper's egg appears to be fragments and parts of bone, plated and fused together to form an egg. However, it is unlikely that the eggs are made of real bone, which is similar in composition to an eggshell.

A member of the Mystery Class, Boneknappers are built in a similar birdlike manner as the Deadly Nadder, albeit much larger and less nimble. Their natural coloration seems to be a dull olive-green and gray, though it can be hard to see under their armor of bones.

Unlike most dragons, which have hard scales to protect themselves from enemies, Boneknapper scales are thin and soft. To counter this weakness, Boneknappers cover themselves in the bones and horns of dead dragons and other animals. As a form of defense, they can use a huge concentration of bones, forming a club at the end of their tail to disarm or injure opponents. 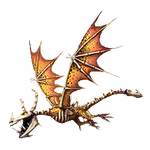 According to Dragons: Rise of Berk, the Titan Wing Boneknapper has orange, pinkish skin with many brown dots on its wings. They still retain their bone armor and most bones remain the same. However, the clubbed end of its tail becomes a smaller, sharp dragon skull. As with most Titan Wings, the Boneknapper increases a lot in size when it reaches this stage of growth.

Boneknappers can breathe bursts of red and orange fire that are similar to that of the Red Death's. It does not appear to be very hot as the gang was shown to be able to stay very close to it and the dragon ribcage that got burned was not charred.

The Boneknapper's main objective is to collect bones to protect itself. Gobber's Nemesis is special, since he will do whatever it takes to get the Terrible Terror pelvic bone, even if it means that he has to risk his own life to get it. The Boneknapper is known to create skeleton armor from the bones of other dragons and sometimes other vikings. As their armored body can protect them from attacks for great defense. They are also able to create a club tail out of bones for smashing their opponents. It's also been show that they can add extra armor underneath or one their bone armor, such as: lava, ice, moss, various viking items, dragon armor, etc.

Sometimes, this bone armor can be essential for the dragon to perform basic actions, such as roaring. The Boneknapper will often go to extreme lengths to find the bones it seeks, hunting down the fragments for years.

Due to their large size, Boneknappers display an amazing level of strength. They are able to wear bones of dragons as armor, as well as carry the weight of seven Vikings and a sheep on their body with no sign of struggle.

As shown in Legend of the Boneknapper Dragon, Boneknappers possess a high amount of stamina that enables them to fly and run well for long distances, even while carrying several humans on its back, without any signs of struggle.

Boneknappers have the ability to make a powerful roar that needs a special piece of bone, acting as a throat bone on its body in order to be released. This roar can also be used as a mating call that can attract others of their kind.

Despite their large size and their armor of bones, Boneknappers are very stealthy dragons, for they are able to sneak up on their prey without making any noise.

Without their bone armor, the Boneknapper is as weak as a boneless chicken and is vulnerable to their enemies attacks.

If one bone that is required for its armor is missing, the Boneknapper also loses its ability to roar.

Boneknappers, due to their dependency on bones, spend a lot of time looting piles of dragon bones for the perfect pieces of armor. While they can spend years pursuing a single piece of bone, it is evident that these dragons are extremely determined and are perfectionists when it comes to maintaining their armor.

Though Boneknappers spend much time keeping their bone armor clean, occasionally some individuals will also incorporate other material into their armor such as Skullcrown utilizing ice, and the Cryptic Collector donning Moss.

It is also confirmed that as long as their objectives to collect perfect bone pieces is fulfilled, Boneknappers can be very calm and friendly towards human beings. This can be seen when Gobber gave up his lucky bone, and instead of killing him, the Boneknapper affectionately nuzzled him and requested for him to stroke him. And when Gobber relented, the dragon took on a more stereotypical family dog portrayal, lying on its back and thumping its tail.

According to the Boneshedder page, once a year, Boneknappers will discard any old or broken bones in favor of new, stronger ones.

According to Dragons: Titan Uprising, Boneknappers tend to be solitary for part of their lives, at least until their bone armor is complete.

According to Gobber, to train a Boneknapper, one must give it whatever it desires. It will then become like "an overgrown puppy dog".

The Boneknapper makes a brief appearance in the first How to Train Your Dragon film. After Dragon Training, Hiccup reads through the Dragon Manual in order to find information on the Night Fury and ends up finding a page about the Boneknapper as he flips through the book.

The Boneknapper appeared as the main antagonist in Legend of the Boneknapper Dragon, a 15 minute short created for the release of How to Train Your Dragon on DVD. Originally having hunted down Gobber since his teen days numerous times, the Dragon made its first physical appearance on a distant island after Gobber, along with Hiccup and his friends, set out to capture it. Hiccup realizes that Gobber's belt buckle is the piece of bone that the Boneknapper wants, which is missing from its neck. Reluctantly, Gobber gives the piece of bone back to the dragon, where it suddenly becomes quite docile and playful. As a thank you, the Boneknapper lets Gobber, Hiccup and the others ride on its back to get home. With its armor complete, the Boneknapper let out a triumphant roar, drawing other female Boneknappers to follow its mating call back to Berk.

The Boneknapper and its abilities were mentioned in Book of Dragons, in which Gobber explains how he trained it. He also tells a story about how Bork the Bold met a Boneknapper while he was collecting bones. The wild dragon took all of Bork's bones and roared at him, which caused the latter to lose his clothes.

The Boneknapper made a short appearance in this Dragons: Riders of Berk comic as a captive dragon that got freed after the gang saved them.

This dragon then appeared as a Rare dragon in Dragons: Rise of Berk, unlocked by Toothless at level 40 at Dragon Graveyard. Other individuals like Gobber's Nemesis, Boneshedder, Brute Boneknapper, and Defender Boneknapper. Boneknapper and Brute Boneknapper can be used in Brawl.

This dragon also became available in School of Dragons, where players can also get matching outfits in packs. There is also a quest during which the player finds a female Boneknapper and her baby in the Whispering Death Tunnels.

Several Boneknapper individuals, like Bog-Blight, Skullcrown, Cryptic Collector, Grave Knapper, and Bludgeon Knapper, and hybrids, like the Bonestormer, appear in this game.