Boast-Roaster is a Humbanger appearing in the game, Dragons: Titan Uprising.

Boast-Roaster is a subdued pinkish red, with darker red patches over his head, body, and tail. His spines are a swampy shade of green and his underbelly is white, while his wing membranes fade to orangey yellow. His pupil-less eyes are an icy sky blue. 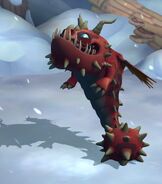 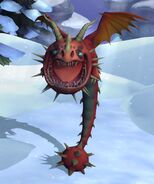 Retrieved from "https://howtotrainyourdragon.fandom.com/wiki/Boast-Roaster?oldid=530770"
Community content is available under CC-BY-SA unless otherwise noted.