How to Train Your Dragon Wiki
Register
Don't have an account?
Sign In
Advertisement
in: Dragons: Rise of Berk, Dragons, Characters,
and 7 more

Boarcharger is a Buffalord that appears in the game, Dragons: Rise of Berk.

Boarcharger is mostly vivid red, with orange and white stripes on its back and wings. Its horns are a shiny crimson color.

According to the official description in Dragons: Rise of Berk, Boarcharger "has a mean streak". It seems overly sensitive to high-picted sounds such as whistling and will charge or attack when subjected to them. This is not typical of most Buffalords. 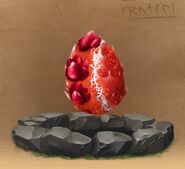 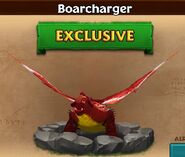