Located at the southern tip of Berk, Black Heart Bay is a shoreline surrounded by cliffs and numerous smaller isles and sea stacks.

In DreamWorks Dragons: Wild Skies, the shore is connected to mainland Berk via a chasm between two cliffs. On land, however, Black Heart Bay resembles a sand dune. It is covered mostly by orange sand, which form gigantic arcs and ridges. In the middle of one of the larger islands is a large waterfall, surrounded by lush conifer forests.

The Hideous Zippleback can be found and tamed in Black Heart Bay. In addition, fish as well as fire weed can be collected there.

The Inner Ocean is the third area of the Berk Forest the player encounters. Several wild dragons reside here that the player must fight in order to advance in the game. Black Heart Bay is also considered part of the Hooligan Timberland, one of the many forested locations that fall under the Hooligan Tribe's jurisdiction. Later in the game, this area is seen overrun with Dragon Hunters from the Dragonroot Company. 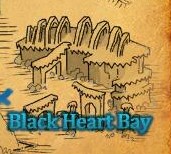 On the Wild Skies map

Retrieved from "https://howtotrainyourdragon.fandom.com/wiki/Black_Heart_Bay_(Franchise)?oldid=416195"
Community content is available under CC-BY-SA unless otherwise noted.