Bjarke the Bear is a member of the Dragonroot Company and one of the antagonists of the game Dragons: Titan Uprising.

As part of Maeve's plan to destroy Berk, Bjarke was sent to Valka's Mountain to drive mad a Bewilderbeast using dragon root. After he did so, he escaped the giant dragon and travelled travelled through the Frozen Tundra, creating havoc among dragons.

At one point, Bjarke met Ruffnut, Tuffnut and another dragon trainer from Berk. He recognised them as his enemies and threatened them, saying that the Dragonroot Company has enough power to destroy Berk. He then left the trio to figh wild dragons.

Later, Bjarke met them again and told them the Dragonroot Company was located in Valka's Mountain, tricking them into going there, and hoping that they would be killed by the Bewilderbeast. He then left without a trace, presumably back to his leader, Maeve.

Bjarke looks like most Dragon Hunters, with a built upper body, bald head, round nose, and beefy arms. He has a long scar over his right eye, presumably made by a dragon. He wears a green tunic, a red vest and a metal shoulder pad on his right shoulder. He has a small helmet with three long spikes on the middle and a leather-like material which covers both sides of his face.

Bjarke hates dragons and holds a grudge against Berkians, which stay in his way of hunting the animals. He appears to have respect towards his leader, Maeve, and doesn't just follow her orders blindly. He is quite brave, as he accepted to go near a Bewilderbeast and use dragon root on it.

Intelligence: Bjarke is quite intelligent, as he managed to trick the twins into going to Valka's Mountain, where a feral Bewilderbeast was located, by telling them that the Dragonroot Company was there.

Stealth: It is assumed that Bjarke has very good stealth, as he was able to escape a Bewilderbeast after using Dragon Root on it.

Ever since they met, Bjarke and the twins continuously mocked each other. Tuffnut believed he was just another villain that he and his sister would defeat. Bjarke repeatedly threatened the two, but the twins didn't pay much attention to him. The were, however tricked by him into going to Valka's Mountain, where they had to fight a feral Bewilderbeast. After the battle, the twins began to believe Bjarke's words and realised that the Dragonroot Company was a greater threat than they thought.

Despite never been seen interacting with each other, Bjarke apears to have great respect towards his leader and her plan to destroy Berk. 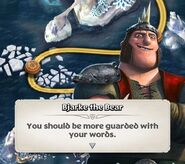