How to Train Your Dragon Wiki
Register
Don't have an account?
Sign In
in: Objects, Franchise Objects, Weapons,
and 3 more

Big Bertha is a catapult originally created by Gobber the Belch as a dragon-killing weapon. He later unsuccessfully tried to sell it as a home protection device after peace with dragons was enacted.

At some point before the events of "Viking for Hire", Gobber created Big Bertha for use as a dragon-killing weapon. However, both Bertha and Gobber lost their main purpose after peace with the dragons was enacted. Because of this, Gobber attempted to peddle off his weapons to the villagers of Berk, with Gobber trying and failing to give each weapon a new purpose in a peaceful society. After failing to sell both a sword and a mace as a butter knife and flyswatter respectively, Gobber attempted to appeal to the Berkian women by claiming that they could use Big Bertha's boulders to defend their homes from invaders while their husbands were off pillaging. However, while trying to demonstrate Big Bertha's capabilities, Gobber accidentally released the large boulder in Bertha's basket, sending it hurtling through the roof of Silent Sven's house. After this third failure, the villagers left, leaving Gobber behind with Bertha, who reasserted that he would find a place in this new society for both the catapult and himself.

After the Hooligans move to New Berk during the "Hidden World" Expansion, the player asked Gobber for help fortifying defenses around the island. Gobber fondly recalled Big Bertha.

Big Bertha has the appearance of a typical catapult. A metal basket on a long wooden handle is used to throw large rocks. The handle sits on a wooden cart with four wooden wheels. The handle is tied to the cart with rope, allowing the handle to be pulled back with the aid of a lever and released to throw the boulder at its intended target. 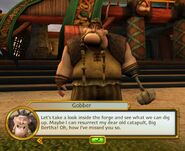