How to Train Your Dragon Wiki
Register
Don't have an account?
Sign In
Advertisement
in: Tribes, Franchise Tribes, Dagur the Deranged,
and 9 more

The Berserker Tribe is a tribe of fierce Vikings and is one of the largest tribes in the Barbaric Archipelago.

Unlike the Hooligans, the Berserker Tribe has an official Tribe crest - the Skrill.

In the game, School of Dragons, Dagur arrives on Berk during Snoggletog. He appears to know what Snoggletog is and says that the Berserkers have a similar tradition.

The Berserkers appear to be a militaristic tribe with many weapons at their disposal. However, they are also fishermen, and this may account for a large portion of their livelihood.

According to Viggo Grimborn in "Triple Cross", the Berserkers captured Skrills with a simple method.

The Berserker Tribe utilize a variety of weaponry - crossbows, catapults, axes, bludgeons, and swords throughout the TV series.

In "Twinsanity", the Berserkers visit Berk when it was time for the annual signing of the peace treaty. Stoick was expecting Oswald the Agreeable, the chief of the Berserker tribe, but to their great astonishment, Oswald's son Dagur (whom Hiccup describes as a lunatic and many other berkians fear) turns out to be the new chief of the Berserkers, and is now called Dagur the Deranged. Dagur explains that his father has been "retired", and he took over the responsibility of being chief of the tribe, though Dagur doesn't have any qualities of a good chief. After a few events in the episode, Dagur and the Berserkers were forced to flee, but told Gobber to consider the treaty signed.

In "The Night and the Fury", the Berserkers returned when they accompanied Dagur to Dragon Island. There, they learned that Berk trained, as opposed to kill, dragons.

In a "A View to a Skrill, Part 1" and "A View to a Skrill, Part 2", the Berserkers commanded a vast armada of ships. According to the stories told by Stoick's grandfather, the Berserkers had the ability to command the power of the Skrill, using tethered harnesses to force the dragon to attack with lightning. The Berserkers discovered a frozen Skrill and tried to dig it out, but were stopped by the dragon riders. They fought off the riders again when they were trying to capture the dragon again. While they did not get it, the Berserkers formed an alliance with the Outcasts, who had the Skrill, to attack Berk. In the end, Dagur used the Skrill to defeat Alvin, and become chief of both the Berserkers and the Outcasts. Their invasion was put on hold after Hiccup had freed and refroze the Skrill.

Following the loss of the Skrill in "The Flight Stuff", the Berserkers and the Outcasts, who had joined together, set up a trap for Hiccup and Toothless, but failed once again.

In "Dragon Eye of the Beholder, Part 1" and "Dragon Eye of the Beholder, Part 2", Dagur and most of his Berserkers then spent 3 years in prison on Outcast Island. However, Dagur, Vorg, Savage and other Berserkers later escaped, taking Trader Johann's ship with them to get revenge on Hiccup and Berk. They later went to the Ship Graveyard to capture the riders other than Hiccup. Afterwards, they took the Dragon Eye from Hiccup and sailed off with it. However, Hiccup made a surprise attack on Dagur, and got the Dragon Eye back.

After the run in with Hiccup's dragon riders, the Berserkers then salvage The Reaper traps in Gone Gustav Gone".

In "Have Dragon Will Travel, Part 1" and "Have Dragon Will Travel, Part 2", a rogue dragon rider (Heather) has been plotting revenge on Dagur for destroying her village, and attacks the Berserkers, but is then captured by Dagur with Dragon proof chains. Later, Heather, and the riders attack the Berserkers, who have a new set of ships with Dragon Proof Winches. They are then, once again, defeated.

Dagur and his men then attacked Berk in order to find the location of Dragon's Edge. The Berserkers then attacked Dragon's edge but were driven back by the Auxiliary Team in the episode, "Team Astrid".

In "The Zippleback Experience", the Berserkers, alongside the Hunters, then attempted to kidnap Hiccup to get the Dragon Eye and it's information to no avail.

They then took part in another attack on Dragon's Edge with no apparent success, in "Edge of Disaster, Part 1.

Dagur then used several of his soldiers to play a game of Maces & Talons with Viggo, in "Maces and Talons, Part 2".

The home of the Berserker Tribe is finally seen in the episode, "Something Rotten on Berserker Island". It is revisited in the episodes "Searching for Oswald... and Chicken" and "Sins of the Past".

Berserker Island and the surrounding waters are revisited in the episode "In Plain Sight". The dock area is seen, along with Berserker fishermen, particularly Ansson.

In the past, the Berserker Tribe was the led by Oswald the Antagonistic (future Oswald the Agreeable), who led an invasion against Berk but were driven back Stoick, Valka, and their fellow Vikings. 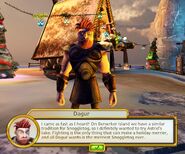