Berserker Ships are seen in both the TV series as background objects, and in the game, School of Dragons.

The Berserker ships are a form of Viking longship. They all are adorned with a wooden dragon figurehead and dragon tail at the stern, painted with blue. They appear to be single-deck and single mast ships as is characteristic of a longship. The square sail is white with a stylized image of a Skrill on it. Most ships are lined with spiky shields. In some instances, the lead vessel that the chief sails in has the Skrill emblem, while the other ships have a plain sail.

In the game, School of Dragons, the Berserker ship is equipped with crossbows directly mounted to she ship, and two cannonball catapults.

In the episode, "Twinsanity", the first Berserker ships are seen, at the introduction of Dagur the Deranged and his Berserker Tribe to the DreamWorks Dragons Franchise.

In the beginning of the episode, "A View to a Skrill, Part 1", the Dragon Riders fly out in search of fishermen Mulch and Bucket. They find them at the mercy of a Berserker Tribe ship under the command of Captain Vorg. While Bucket and Mulch thought the Berserker crew was in need of aid, in actuality they had discovered their Tribe's symbolic dragon: the Skrill.

More Berserker ships are seen, in conjunction with Outcast ships, in the episode, "A View to a Skrill, Part 2", after Alvin the Treacherous appears to die at sea and Dagur the Deranged takes over control of Outcast Island.

Several Berserker ships are seen in the episode, "Have Dragon Will Travel, Part 1". The group of ships almost successfully take down Heather and Windshear with dragon-proof chains.

Before Dagur's change of heart, he used Berserker Ships to locate and seek revenge upon Hiccup. His ships are seen in the episode, "Team Astrid" laying siege on Dragon's Edge.

The Battle Event is a multi-player activity that occurs every two hours in game. Players ride their dragons and shoot down either an Outcast Scout Ship or a Berserker Scout Ship during a timed event. The ships will fire cannonballs and arrows to damage players. Touching the ships will send players to designated recovery areas. Prizes are awarded if the players are successful sinking the invading ship.

There is a searcheable location to find Dragon eggs in the game, Dragons: Rise of Berk called Dagur's Ship. As Dagur is the current chief of the Berserker Tribe, it follows suit that his personal ship is a Berserker Ship.

Outcast and Berserker Ships in "A View to a Skrill, Part 2" 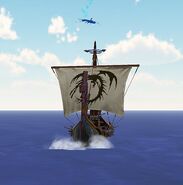 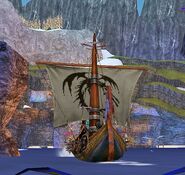 In Dragons: Rise of Berk
Add a photo to this gallery

Retrieved from "https://howtotrainyourdragon.fandom.com/wiki/Berserker_Ships?oldid=513874"
Community content is available under CC-BY-SA unless otherwise noted.