How to Train Your Dragon Wiki
Register
Don't have an account?
Sign In
in: School of Dragons, Objects, Franchise Objects

People of the Isle of Berk

People of the Isle of Berk

Raise and lower platforms and objects

The Berk Winch is a building built by the Berkians on School of Dragons Island to help raise and lower platforms and objects.

At some point before the time the game takes place, the winch was built on The Lookout in the School of Dragons Island. It was run with a spool of cable that could raise or lower a platform.

During the quest "The Simplest of Machines", Hiccup realizes that a pulley system would function better than the cable spool. He and the player construct a large pulley system and place it in the winch, allowing it to perform its tasks even more efficiently.

Like a cable winch in the real world, the Berk Winch is built to raise and lower a platform. Objects can be placed on this platform in order to be raised or lowered to the height they are needed at. 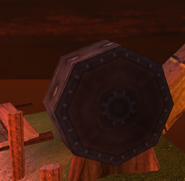 Winch pulley wheel in "The Simplest of Machines" Quest.