How to Train Your Dragon Wiki
Register
Don't have an account?
Sign In
Advertisement
in: School of Dragons, Objects, Franchise Objects

Symbol of membership and honor

Berk Watch Medals are seen in the game School of Dragons, as part of the player Quest, "Forming the Berk Watch".

Astrid wants to make medallions for "every trainer who helps show they're elite" because "the most skilled dragon trainers should help out in the defense of the village." She refers to these elite Dragon Riders as the "Berk Watch". The game player needs to find gold nuggets and give them to Hiccup, who in turn forges the medals. The player then distributes the medal to Snotlout, both Twins, Hiccup of course, and Fishlegs. It is assumed that Astrid gets one, too. Then Astrid offers the player the chance to join the Berk Watch and receive a medallion. The player must complete some challenges, and is then awarded the honor.

The Berk Watch Medal is roughly as big as a fist, flat and made of gold. It has the School of Dragons logo on it.

In the game, the medal is wearable by the player's avatar in the form of a teal top, with two gender-specific versions. 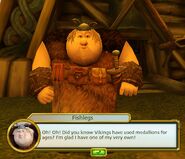