How to Train Your Dragon Wiki
Register
Don't have an account?
Sign In
Advertisement
in: Locations, Franchise Locations, Forests and Woods,
and 9 more

Berk Forest is a location that informally appears in several Dragons: Riders of Berk episodes. It is later formally named in the game Dragons: Titan Uprising.

The forests of Berk are a thick and lush old-growth forest covering the rocky island outside of the village and farmland. There are a mix of evergreen and deciduous trees, as well as shrubbery and some other vegetation on the forest floor.

In Dragons: Titan Uprising, despite being called a forest, Berk Forest consists mostly of plains, fields and lakes, surrounded by evergreen trees.

In "The Terrible Twos", while practicing flight maneuvers through Berk Forest, Hiccup and Toothless discover an injured baby Typhoomerang, Torch. While Hiccup takes the baby home, Torch's Mother rampages through the forest and causes fires and destruction looking for her baby during the night. Finally, after listening to Toothless, Hiccup brings Torch back to the forest to re-unite with his mother.

Later in "Alvin and the Outcasts", after the Berk Armory is destroyed, the Hooligan villagers flee into the forest to hide and engage in guerilla warfare on familiar turf against the invading Outcast Tribe.

The Dragon Riders venture into the forest following clues on a treasure map in "Portrait of Hiccup as a Buff Man". They find a walled over cave in the woods leading to a colony of average Fireworms and the treasure.

Two areas of the Berk forest are featured in this game. The player - playing as Hiccup - must first find the downed Night Fury, and then find other objects in the forest while avoiding dangers such as spiders, wild boars, bees, and carnivorous plants.

In this game, the player - playing as a rider/dragon pair - must fight off armored dragons from Drago's Army.

Woodwind the Woolly Howl also lives in the Berk Forest, and speeds so fast her tail acts as a woodwind instrument.

Jewelbilant the Rockstomper also appears to live in the forest, and likes to hide shiny things there.

Brute Timbertoast also appears to live in the forest, with it having nearly burned much of it down several times.

Berk Forest is the first main location of this game. Fishlegs Ingerman accompanies the player throughout the levels of this section. The sub-sections of Berk Forest are:

Later, the player and Dragon Riders find that the Dragonroot Company has taken over most regions of the Barbaric Archipelago, including Berk Forest (which is also called 'Hooligan Timberland'). The player must battle crazed dragons again in the same areas they had previously, and also some new sections.

In "The Terrible Twos" 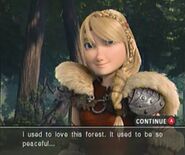 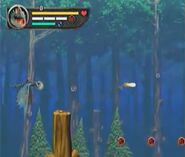 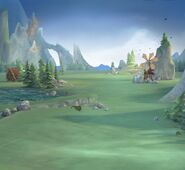 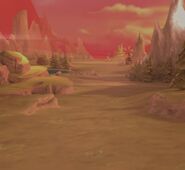 While taken over by the Dragonroot Company 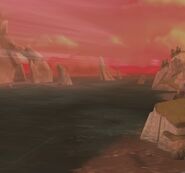